OurWorldInData.org – a new web publication by INET Oxford shows how the world is changing

www.OurWorldinData.org is a new web publication that portrays the social, economic, and environmental history of our world up to the present day. The content is based on empirical data which is visualized in interactive graphs and maps.

The online publication shows how living standards around the world have changed and covers a wide range of topics: Trends in health, food provision, the growth and distribution of incomes, violence, rights, wars, education, the environment and many other aspects are empirically analyzed and visualized. Covering all of these aspects in one resource makes it possible to understand how the observed long-run trends are interlinked.

The freely available web publication is used by academics, journalists and entrepreneurs. The interactive visualizations – licensed under a permissive CC license – are directly usable for journalists (who can either copy the visualizations or directly embed them in their web publications). For entrepreneurs it is important to understand how the world is changing to understand future developments and see new opportunities. Academics use OurWorldInData.org as a starting point for their own research since the website catalogs exhaustive lists of data sources for each topic – the website is in this sense a database of databases. Lecturers access the web publication because the visualizations can be directly used for the preparation of their teaching material.

How has the world changed?

I have chosen some visualizations of long-term trends to give an idea how our world has changed. It is only a small excerpt but it shows the range of different aspects covered in OurWorldInData.org.

Income is a very important aspect but there is more to a good life than material prosperity. One of the main motivations of OurWorldInData.org is to show how life around the world is changing in a broad range of aspects.

Over the last decades this global inequality decreased substantially. Countries that not long ago were suffering from bad health are catching up rapidly. And today no country in the world has a lower life expectancy than the the countries with the highest life expectancy in 1800.

The increase in life expectancy was predominantly due to changing mortality at a very young age. The interactive map below visualizes child mortality (the number of children dying before their 5th birthday per 1,000 live births) between 1950 and 2012 – you can change the visualized data by clicking on the year in the top row.

But progress was not confined to an increase in material living standards and the health of the population. Progress also encompasses the interpersonal relations. The following graphs shows the long-term decline of interpersonal violence.

Click on ‘Expanded’ to change the perspective to the share of people living under the different political systems.

Looking at the long term trends makes it also possible to see the challenges we are facing and to see where things are not getting better. In a sea of hysteria it is hard to hear the important warnings and to point out the issues that truly matter.

One of the aspects that rightly trouble us is economic inequality. The following two charts show that industrialized countries saw a substantial reduction of income inequality over the course of the first half of the 20th century – for several decades the poor got rich faster than the rich. But this is not true anymore: In Europe and Japan inequality is not falling anymore and is moderately increasing some countries. And in the English speaking countries shown in the second chart we see a significant increase of inequality and a return to the high levels of the early 20th century.

(The history of inequality over the course of the last 100 years and for 30 years is visualized in more detail in the INET online publication ChartbookOfEconomicInequality.com.)

OurWorldInData.org also covers environmental trends. Here the long-term picture is mixed: Some aspects get worse – while some get better. The following graph shows the little known fact that oil spills are becoming less and less common.

Why do we publish OurWorldInData.org and where do we want to go with this publication?

The empirical evidence overwhelmingly shows a world of rapidly improving living standards. Because our hopes and efforts for building a better future are inextricably linked to our perception of the past it is important to understand and communicate this historical development. Studying our world in data and understanding how we overcame challenges that seemed insurmountable at the time should give us confidence to tackle the problems we are currently facing. It is easy to be cynical about the world and to maintain that nothing is ever getting better. But fortunately the empirical evidence contradicts this view. We believe it is partly due to a lack of relevant and understandable information that a negative view on how the world is changing is so very common. It is not possible to understand how the world is changing by following the daily news – disasters are happening in an instant, but progress is a slow process that does not make the headlines. We believe it is important to communicate to a large audience that technical, academic, entrepreneurial, political, and social efforts have in fact a very positive impact. OurWorldInData shows both: It highlights the challenges that lie ahead and it shows visually that we are successfully making the world a better place.

The demand for the web publication greatly exceeded our expectations and the feedback has been fantastic. Although OurWorldInData is only available for 3 months there were more than 120,000 people on the website. It is still work in progress, but if we can attract funding for this project we can develop this freely available web publication further and expand OurWorldInData over the coming months. Follow Oxford economist Max Roser on Twitter to be up to date: @MaxCRoser. 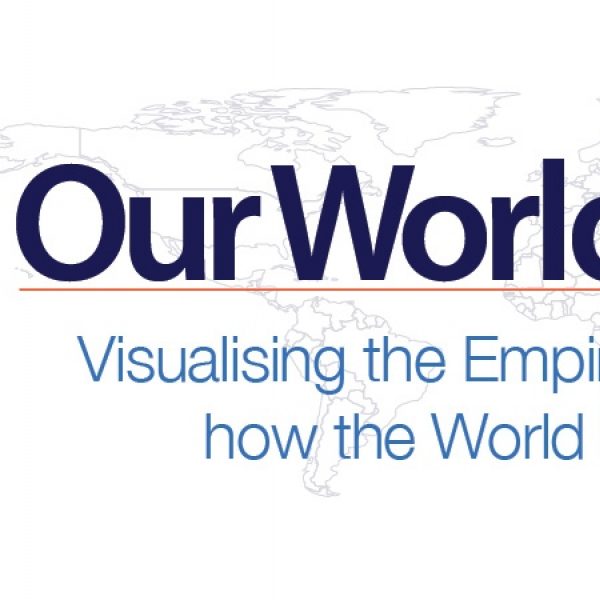