On June 11th and 12th the working group organized an Interactive Inequality Workshop in collaboration with the Atlantic Fellows Programme and the International Inequalities Institute (III) at the London School of Economics. The IWG was awarded an event grant from INET YSI which enabled young scholars from across Europe, the Americas and Asia to attend the workshop.

The first day included presentations by all participants and two senior scholars Dr. Alex Teytelboym (INET Oxford) and Dr. Paul Segal (King's College, London). The second day was very interactive. Participants created an inequality mind map highlighting the multidisciplinary nature of inequality studies. Followed by presentations from Prof. Mike Savage (LSE), Mike Herd (Editor of The Guardian Inequality Website) and Adam Corlett (Resolution Foundation). An online prototype of the mind map is currently under construction at the INET New York Office which we hope to launch at the INET Festival for New Economic Thinking in Edinburgh later this year here.

On June 13th workshop participants were cordially invited to attend the III Annual Conference. At the end of the day some participants managed to get their pictures taken with keynote speaker Nobel Laureate Professor Amartya Sen. The Inequality Working Group and the LSE International Inequalities Institute hope to continue collaborating in the future.

From June 17-21st the working group was present at the YSI Latin America Convening 2017 “Globalization and the Developing World”. We were warmly welcomed by the Dean of the Economics Faculty at the Universidad Iberoamericana in Mexico City. Latin America is often referred to as the most unequal region in the world. This was strongly reflected in the pool of applicants, of which half were inequality related.

Nobel Laureate Professor Joseph Stiglitz (Columbia University) delivered the keynote address “Globalization and the developing world”. After the talk students were given the opportunity to form a queue and ask questions ranging from inequality to monetary policy. Prof Stiglitz patiently answered questions during a Q&A sessions lasting approximately 1 hour. More than 1,200 participants registered for the keynote address. Front row seats were reserved for YSI presenters. The two youngest students in the room got the opportunity to take a selfie with Prof Stiglitz on stage, in which they symbolized all young scholars present in the audience. The keynote address can be viewed here.

The International Economic Association (IEA) World Congress (19th-23rd June) was kind enough to open its doors to YSI students. The opening plenary of the IEA was again delivered by Prof Stiglitz titled “Wealth and income inequality in the twenty-first century”, in which he presented his latest thoughts on the dynamics of inequality. We attended the opening sessions as official YSI delegates. Throughout the remainder of the days participants were able to cross-walk between the YSI Latin America Convening and the IEA World Congress.

Assistant Professor Arjun Jayadev (UMass Boston, Azim Premji) acted as mentor for the Inequality Working Group (IWG). He gave a talk titled “A Discussion on Income Distribution” in which he presented results from the Global Consumption and Income Project (GCIP). The GCIP produces new global estimates for income and consumption.

The inequality working group managed to create strong bonds with participants from all over Latin America. Prof. Stiglitz’ lecture has helped to promote the YSI Working Groups in the region. For many participants it was the first time to present in English and/or the first time outside of their home countries. This exchange was enabled by sponsorships from INET YSI, the Universidad Iberoamericana and the International Economic Association (IEA) World Congress. 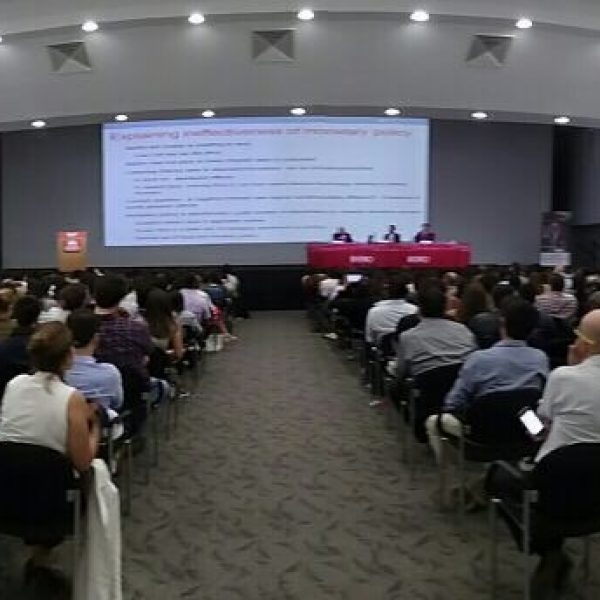