18 June 2014
David Hendry and Grayham Mizon show why the models used by many policymakers perform so poorly in the face of uncertainty
The standard macroeconomic model used by most central banks and other policymakers are "dynamic stochastic general equilibrium models" or "DSGE" as they are known (economists have a knack for catchy branding). There has been much discussion and debate about why these models performed so poorly during the 2008 financial crisis. Not only did these models fail to anticipate the crisis, but during the crisis itself - when they were most needed by policymakers - they often failed to give useful or correct advice.
INET Oxford's David Hendry and Grayham Mizon in a recent paper show that these standard models crucially depend on the assumption of "stationarity" - that there are no unanticipated or structural changes to the world that could affect agent's decision making. Of course the real world is far from stationary - particularly in times of crisis. Hendry and Mizon show that economic history is full of "location shifts" when the means of distributions change. For example they identify four major epochs in British employment history, the pre WWI era 1860-1914, the period from WWI to 1939, the post-war reconstruction until 1979, and then the modern era from 1979 to present. Both the means and variances of employment shifted significantly across these epochs.
Unfortunately such shifts run afoul of the rational expectations hypothesis (REH) that macroeconomic DSGE models are built on. In the rational world of these models agents may face uncertainty about the future, but are supposed to have well defined, stationary probabilistic models to make their decisions on. But in the real world they do not, and as Hendry and Mizon show, this is very damaging for the performance of DSGE models.
This work is part of a broader INET Oxford effort to find better models for policy decision makers than the current generation of DSGE models. Hendry's group have developed pioneering approaches to forecasting in non-stationary worlds with structural breaks. While Doyne Farmer's group and the CRISIS project are developing an agent-based macro-financial model that someday could offer an alternative to DSGE.
For more information see Hendry and Mizon's article in VoxEU and their Journal of Econometrics article.
This work is funded by the Open Society Foundation. 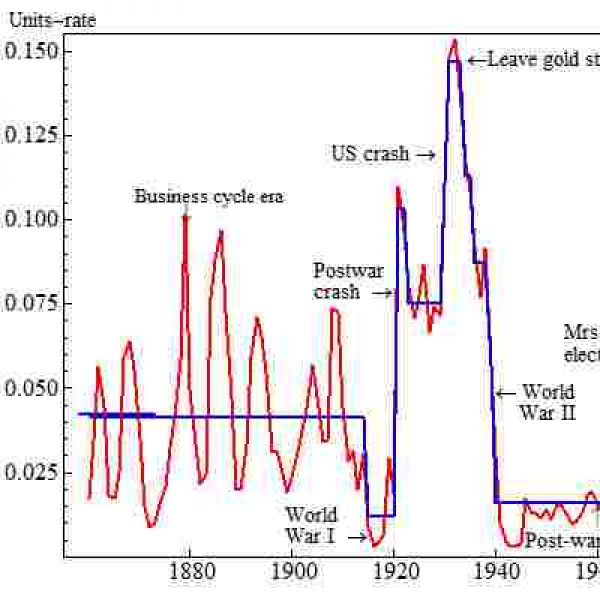