INET Oxford’s Executive Director Eric Beinhocker was recently in Washington DC where he and Seattle based technology entrepreneur and venture capitalist Nick Hanauer spoke at a meeting of the Senate Democratic Steering Committee, chaired by Sen. Mark Begich and included Senate Majority Leader Harry Reid and a number of other senior senators.

The subject of the meeting was the state of America’s middle class. Beinhocker and Hanauer discussed the stagnation of middle class incomes, the loss in middle class savings from the 2008 crisis, the decline in social mobility (the US now ranks behind many European countries in social mobility), and the dramatic rise of incomes and wealth in the top one percent.

Hanauer noted that as an entrepreneur and venture capitalist his decisions on whether to invest and start new businesses are dependent on whether there is demand for those businesses’ products and services – and that demand comes largely from the middle class. He also noted that most of the entrepreneurs who start new businesses come from middle class backgrounds. Growth doesn’t “trickle down” from the top he argued – people at the top of the income scale don’t drive that much consumption (even though they are rich and individually may spend a lot, there aren’t that many of them) and relatively few very wealthy people start new businesses. Rather growth comes from the “middle out” – healthy middle classes have historically been the foundation of both prosperity and democracy.

Beinhocker discussed recent evidence that “trickle down” is also failing to provide the investment that the economy needs. According to standard theory even if the very wealthy don’t spend as much proportionally as the middle class, their savings should be recycled back into the economy in the form of investment. That relationship generally held through the 1970s, but over the last three decades it has broken down. Profits in the US are currently at historically high levels but investment levels are very low. Corporate profits are instead being used for share buy-backs which pump up stock prices, the benefits of which flow primarily to the top of the income scale, rather than investments which create new middle class jobs. There are a number of factors contributing to this, but Beinhocker argued a key factor has been changes in corporate governance in the 1980s that create incentives and pressures for management to focus on short-term share price at the expense of longer-term investment.

Hanauer and Beinhocker discussed various policies that can help support the middle class and social mobility including tax reform, an increased minimum wage, corporate governance reform, and investments in education and infrastructure. They are collaborating with the Center for American Progress who have an initiative on middle-out economics that is developing detailed policy recommendations.

Hanauer and Beinhocker also contributed last summer to a symposium on “middle-out” economics in the journal Democracy where these ideas are explored in more detail. The ideas in that symposium were in turn picked up by President Obama in his July 24 Knox College speech on the economy. Hanauer and Beinhocker also wrote an article in Democracy titled "Capitalism Re-Defined" that further explores these ideas. 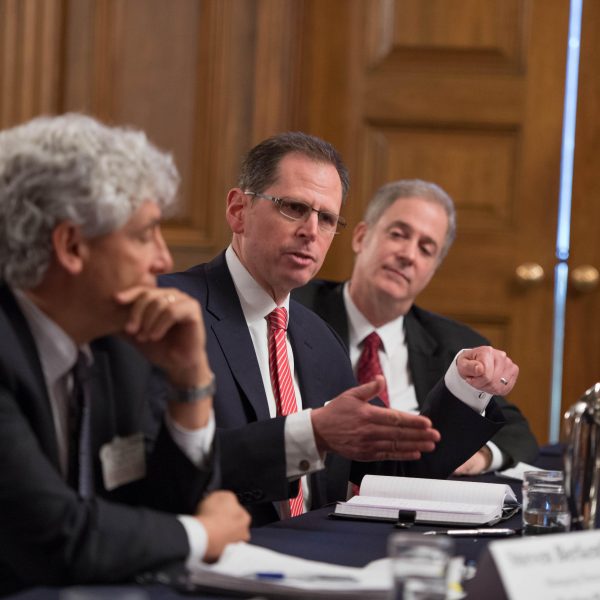