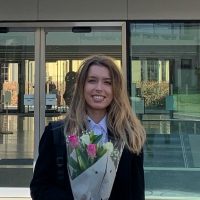 Deborah Miori is a DPhil student in Mathematics at the University of Oxford. She is part of the CDT in the Mathematics of Random Systems and member of INET's Complexity Economics group, supervised by Prof. Doyne Farmer.

Before starting her DPhil, she completed a BSc in Physics with Theoretical Physics at Imperial College London and a MSc in Mathematical Sciences at the University of Oxford.

She is interested in mathematical modelling, networks science, quantum computing and computational finance.