Oxford Academics and the IMF Co-Host Conference on Financial Stability

On October 14-15, academics, practitioners and public sector officials gathered at the International Monetary Fund (IMF) in Washington DC for a conference on “Rethinking Financial Stability: The FSAP at 20”. This conference, which was organised jointly by Doyne Farmer, Alissa Kleinnijenhuis, Thom Wetzer (all Oxford) and Til Schuermann (Oliver Wyman) together with the IMF, was part of the Annual Meetings. This is the flagship annual event from the IMF and the World Bank where the world’s leading financial policymakers (including the G20 finance ministers and central bank presidents) set the agenda for the year ahead.

The first day of this conference revolved around the Handbook of Financial Stress Testing (forthcoming in Fall 2020 with Cambridge University Press), which Farmer, Kleinnijenhuis, Wetzer and Schuermann jointly edit. Stress tests subject financial institutions (or groups of institutions, and sometimes even the financial system as a whole) to a severe but plausible adverse stress scenario and evaluate whether they would weather the storm. During the disruptive financial crisis in 2007-2009, financial stress tests helped avert economic catastrophe by restoring market confidence in individual institutions and the financial system. Since then, policymakers around the world have embraced stress tests, using them not only in times of crisis but also to evaluate the resilience of the financial system to new risks. Stress tests represent, in other words, one of the major risk-management innovations that was developed during the global financial crisis.

The Handbook maps this bourgeoning field, from the models used to the institutional environment needed to successfully deploy them, and also identifies new challenges and opportunities. Its contributors, a group of leading thinkers from multiple disciplines in the public, private and academic sectors, include two former US Treasury Secretaries and a Nobel Laureate as well as upcoming thinkers in the field.

The second day of the conference offered an occasion to mark the 20-year anniversary of the IMF’s “Financial Sector Assessment Program” (FSAP). FSAP assessments have the twin goals of gauging the stability and soundness of the financial sector and to assess its potential contribution to growth and development. In line with these objectives, the debate on this second day of the conference broadened to include a discussion on emerging financial stability risks in areas as diverse as monetary policy in a low-rate environment, rising corporate debt burdens, and climate risk – all areas singled out in the Global Financial Stability Report that the IMF presented at the Annual Meetings on the day after the conference.

With hundreds of visitors from all over the world in attendance, the conference marked a unique opportunity to reflect on the rapid advent of financial stress testing and to consider how, in the years ahead, these stress tests should evolve to help regulators and private sector practitioners to keep financial institutions, and the financial system as a whole, safe. 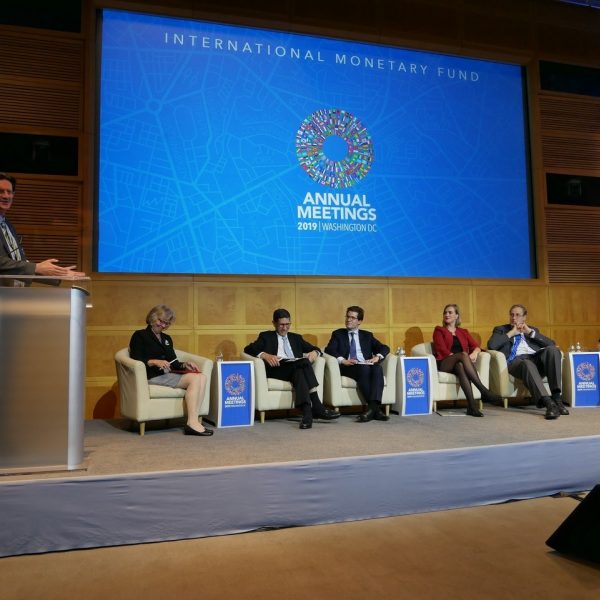