The pilot, which just finished its first phase, was designed and is being evaluated by University of Oxford economists and is run by the Lower Austrian Public Employment Service. Launched in 2020 in the Austrian town of Marienthal, the scheme is unique in offering a universal and unconditional guarantee of a well-paid job to every resident unemployed for more than 12 months.

Sven Hergovich, CEO of the Lower Austrian Public Employment Service and initiator of the programme, says, ‘I had high hopes when we started the programme but these positive results even surpass my expectations.’

Programme participants are supported to find work and are guaranteed paid work in either the private or the public sector. They earn at least the minimum wage, bringing their income above their previous social benefits. All participation is voluntary; no sanctions are involved.

Responding to today’s results, Maximilian Kasy, University of Oxford professor and study author says, ‘It is striking to see what a difference the programme made. Yes, people had more money, but the positive impacts went well beyond economics: they were happier, more rooted in their community, and felt in the driving seat of their lives again.’

'Participants were happier, more rooted in their community, and felt in the driving seat of their lives again.’ Maximilian Kasy, University of Oxford professor and study author

Scheme participants start with two months’ preparation, including one-to-one training, counselling and, for those who need it, support from experienced social workers, doctors and psychologists. They are then helped to find a suitable and subsidised private sector job or supported to create a new job based on their skills and their knowledge of their community’s needs. A year of Austrian unemployment costs approximately €30,000 per person whereas the project costs €29,841 per participant per year.

Lukas Lehner, University of Oxford economist and study author, says, ‘Long term unemployment scars lives and damages communities, yet the Marienthal job guarantee shows it is possible to virtually eliminate this harm with an affordable, innovative social policy. People want meaningful work at fair pay, and helping them to access it benefits us all.’

'People want meaningful work at fair pay, and helping them to access it benefits us all.’ Lukas Lehner, INET Oxford economist and study author

Participants reflect on the scheme:

One of the participants, Werner V., aged 60, says of the experience, ‘After more than 600 job applications, my wish for employment proved hopeless. Too old, too expensive, without long term prospects due to my age, seemingly over-qualified for service jobs… many obstacles seemed to exist. The job guarantee proved extremely valuable and useful for me. In cooperation with the municipality and the local museum, I am archiving and documenting the cultural, scientific and economic value of the historical site of Marienthal.’

Johann, aged 65 said, ‘Before it closed, I worked in a local chemical company for 38 years. So far [as part of the job guarantee], I have worked in renovation and have been able to apply my skills in many ways. With the help of the job guarantee, I will start as a warehouse worker in a recycling company in October 2022.’

Another participant, Mohamad, aged 44, added, ‘[The] job guarantee provides an opportunity to work every day and learn something new. I am grateful for the help the job guarantee offers; it is important for me.’

Jobs created since the start of the programme include work in carpentry, renovation, gardening, elderly care, and office administration. Some projects were created by participants and several support communal public services, including the local school and kindergarten.

Public food garden: The local mayor provided 250m2 of land which participants cultivate as a sustainable food garden. Herbs and vegetables can be picked free of charge and the garden is open year-round. The first harvest was in summer 2022.

Animal therapy: Two participants are employed with an association providing animal-assisted therapy for children with various conditions (e.g. autism, ADHD, disabilities, learning difficulties). By looking after the association’s animals, house, and garden, they have enabled the centre to improve its services and care for more young people.

Funeral urns: During participant Michaela P.’s paid internship doing office work at a funeral parlour, her employer noticed her talent for painting. Her internship turned into permanent employment in spring 2022 and, in addition to office work, she now paints urns – a new business venture for the parlour. Before Michaela became unemployed, she worked in a canteen and never thought she would be able to include her hobby in her job.

Structural unemployment in Austria has been rising since the 1980s and was compounded by the COVID-19 pandemic. When this pilot began in August 2020, roughly one in five unemployed people in Lower Austria had been looking for a job for more than a year.

In the 1930s, Marienthal was the site of a ground-breaking social research study on how mass unemployment affected not just incomes but also health, wellbeing, social ties, and community life. This new study returns to examine the opposite: how the economy, the community and people’s lives change with access to guaranteed employment. 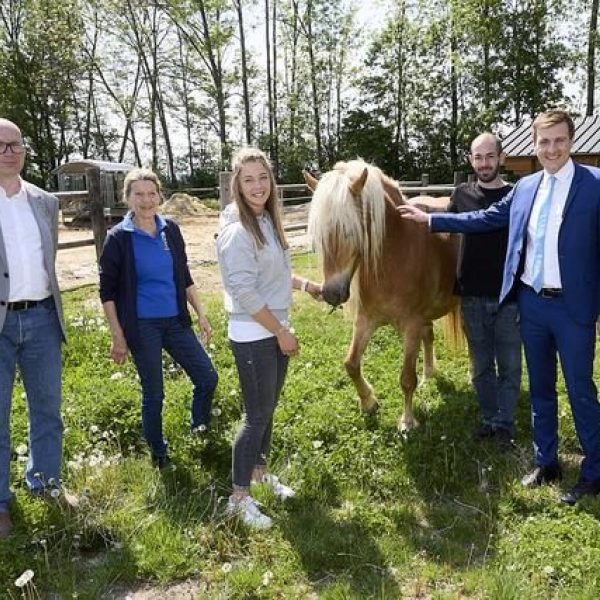